This is an online synopsis of the topic which shows the executive summary and key contacts sections. To view the full document, please download it. 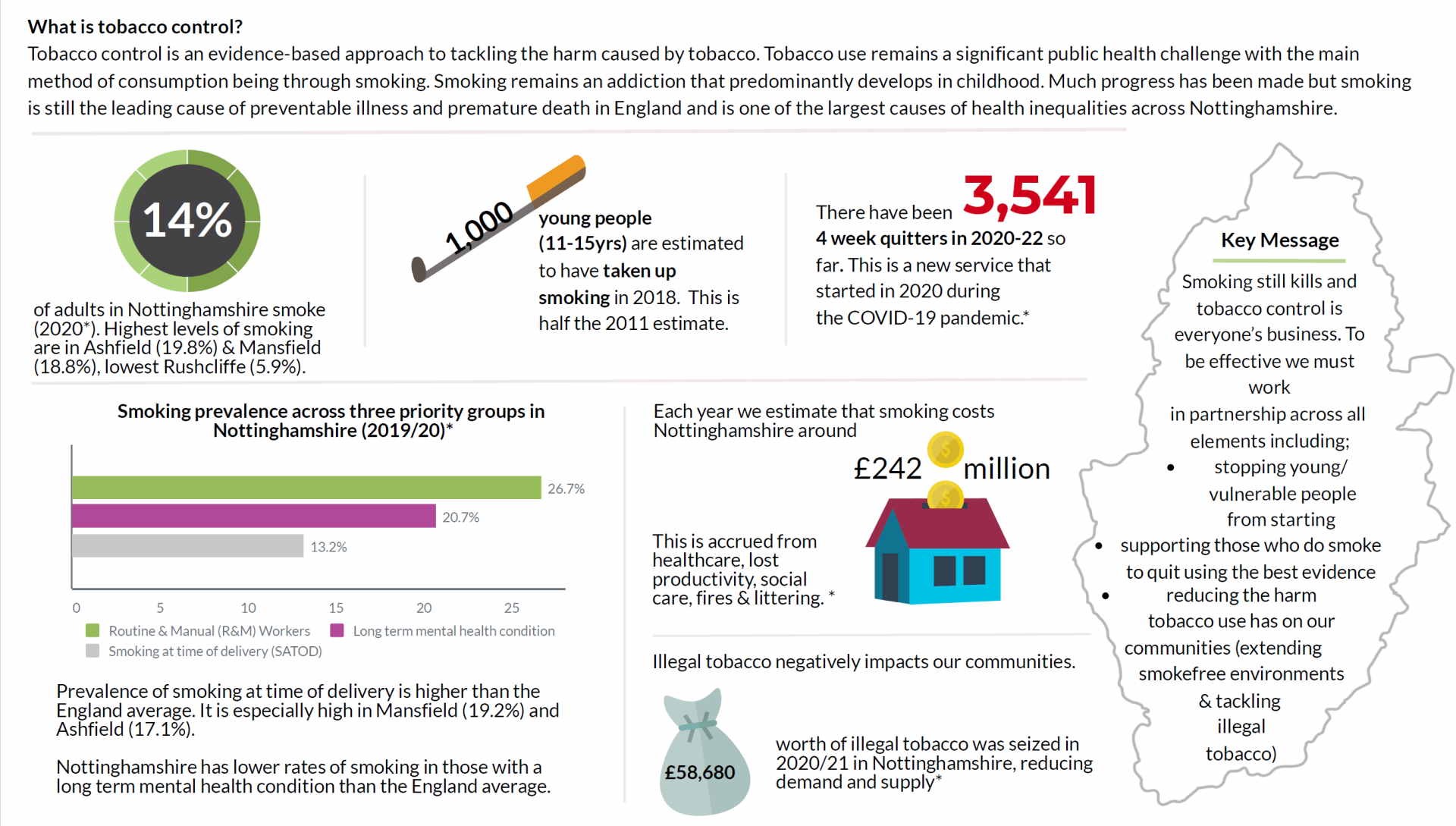 Tobacco use remains a significant public health challenge. The main method of tobacco consumption is through smoking. Smoking is still the leading cause of preventable illness and premature death in England; in 2016, around 78,000 were attributable to smoking in the UK, representing 16% of all deaths1.

Smoking causes harm to the heart (doubles the risk of a heart attack), the lungs (causes 84% of lung cancer and 83% of COPD deaths) and the brain (increases the risk of stroke by at least 50%) amongst many other health impacts1.

Smoking also has a significant financial impact, costing the country approximately £12.5bn per year, including £2.4bn to the NHS and £8.9bn from lost productivity2.

The percentage of people who smoke in Nottinghamshire is 15.4%, above the current England average and varies widely across the county- rising to 23.1% in Mansfield and 3.6% in Rushcliffe.

Smoking prevalence is higher amongst certain groups, such as routine and manual (R&M) workers (26.7%), people with serve mental illness (40.5%) and contributes to social inequalities (R&M workers in Newark and Sherwood are more than 6 times more likely to be a smoker than the rest of the population). Nottinghamshire also continues to have a higher rate of smoking during pregnancy than the England average (14.7% vs 10.8%)3.

This chapter is a refresh of the 2015 Tobacco chapter. It considers all forms of smoking and tobacco consumption, alternate methods of nicotine delivery, such as e-cigarettes and the wider effects of tobacco upon the community, across all ages and takes into account the wider determinants of health. The smoking of illicit substances is out of scope and considered separately in Substance Misuse: Young people and adults (2018) .

Notable changes in Nottinghamshire since the previous JSNA was published include;

A summary of the responses to the preceding assessment can be found in appendix 1.

Unmet needs and gaps - What we still need to improve

Reducing harm from tobacco use

Others includes but not limited to Nottinghamshire fire and rescue service, ICS and ICP partners, Nottingham University, PHE, HMRC

This is an online synopsis of the topic which shows the executive summary and key contacts sections. To view the full document, please download it.

Find all pages beginning with the following letter:
A to Z
